Students walk out at Homewood-Flossmoor HS after blackface controversy 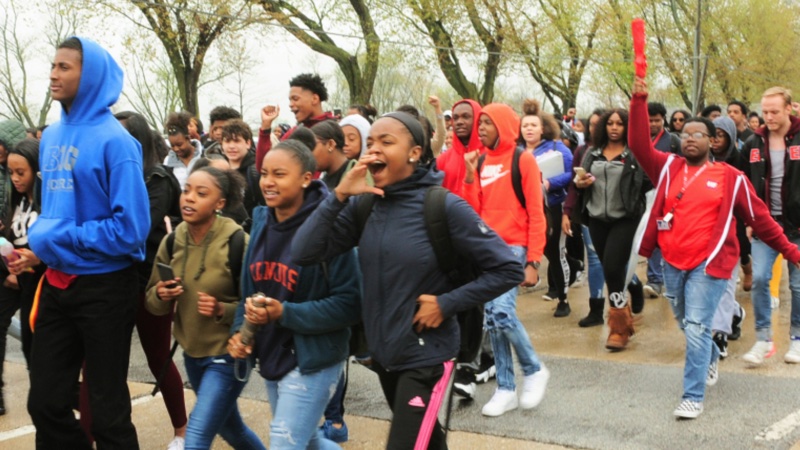 Chanting “We want justice!” and “No place for blackface!” hundreds of students filled Kedzie Avenue.

Local police — as well as officers from neighboring Matteson, Park Forest and the Illinois State Police — were on hand, but the protests, which started just after 12 p.m., appeared to be peaceful. Several students — and parents — said the kids who used blackface should be kicked out of school.

“They should be expelled,” said Claudia Bowens, 18, a senior. “That’s unacceptable when they go to a school with a majority of black students.”

Several protesting students said the relationship between black and white students at Homewood-Flossmoor has generally been good.

“Nothing like this really happened before — that’s why it’s so shocking,” said Darian Hughes, 17, a junior who is African American.

Eleanor Sloan, 16, who is white, said she came out in a show of unity.

“I wanted to do everything I could to show that … we’re a unit, there’s never been tension and we don’t want to see it again,” said Sloan, a sophomore.

Several students said they know who used blackface — and were surprised.

Sheila Boyd, 16, who is African American, said she knows three of the students — one since third grade.

“I knew they were not racist because they have black friends,” Boyd said. “Everybody makes mistakes, and they did something dumb.”

By about 1 p.m., most of the protesters had dispersed and gone back into class.

Before the students came outside, some parents and other supporters had gathered across the street from the main entrance.

“This will show that both the students and the community of this area will not put up with this and will not tolerate it,” said Jason Hampton, 19, who graduated from the high school last year.

The protest of the images that surfaced over the weekend had the support of the administration.

Before the protest, in a joint statement posted online, District 233 Supt. Von Mansfield and principal Jerry Lee Anderson expressed support for students’ “right to express themselves,” adding: “we will work to ensure that all students are safe and respected” and also that students who didn’t take part could “choose to stay in classes and continue to process with their peers and teachers.”

After, they issued another letter, saying in part: “Our students were amazing and conducted themselves in a very peaceful and orderly manner.”

They also acknowledged that the “poor decisions of a small group of students have created enormous upheaval and hurt,” adding that “we understand your frustration that the school district cannot legally share specific information related to student discipline, but do know that the type of behavior these students displayed is not condoned by the school, and we are doing everything possible to ensure that these students understand the ramifications of their actions and that appropriate consequences are received.”

Hampton, however, said the spark for the protest was a rumor among students that those involved were not being disciplined by the school — “No expulsion, no suspension, no nothing,” Hampton said.

Though he does not know the students reportedly involved, Hampton does not believe they acted out of a lack of understanding.

“With this day and age, racism is a big issue, and they knew what they were doing.”

Administrators also addressed students on the school’s TV news channel Tuesday morning, “sharing with them the importance of their voice, participation and plan to move forward as a school and community.”

During English classes on Wednesday, Mansfield and Anderson said, there will be “a school-wide conversation.”

TONY KHAN AGREES!!! There are reasons to Block Superstars From Third Party Platforms.

School Board of Education Votes Against African American History Class