We will never be safe in our own homes if we keep allowing the Racist, White Nationalist (A.K.A. Terrorist) to police our communities.

CPD Sgt. John Poulos 2nd shooting on an unarmed individual, teenager Kajuan Raye, COPA (city's police oversight agency) has found it to be justified. The 19-Year-Old was shot in the back and no gun was recovered at the scene at the time. COPA claims that the gun that the teenager had pointed at his would be killer was recovered 3 months later.

According to Chicago Sun Times

"CPD Sgt. John Poulos shot and killed Kajuan Raye on Nov. 23, 2016, near 65th and Marshfield. Poulos told investigators Raye pointed a gun at him, prompting him to open fire. Kajuan Raye died of a gunshot wound to his back."

"Poulos fatally shot a suspected burglar near a former Lincoln Park bar that was owned by he and his family in 2013. The man was unarmed, and Poulos was cleared in the shooting," According to Chicago Sun Times.

Ricky Rozell was shot and killed by Poulos in 2013.

He fatally  Rozelle, a felon with mental challenges, in a gangway in the 1900 block of North Lincoln Avenue, later telling authorities that Rozelle threatened to kill him and “turned toward [him] with a shiny, metallic object in or near his hand,” records show. No gun was found.

Poulos was cleared of wrongdoing in the Rozelle shooting by both the Independent Police Review Authority and an internal investigation by the police department.

In 2013, Poulos was reprimanded for inattention to duty because his firearm accidentally discharged while he was in a foot pursuit in May 2012 in the South Chicago District, according to the Independent Police Review Authority.

Since 2007, IPRA has investigated more than 400 shootings by Chicago cops — and found only two officers were in the wrong.

In 2015 John D. Poulos received an award for employee of the month for April 2015. Also John had been promoted to Sgt and also an instructor in the Education & Training Division teaching L.E.M.A.R.T. (Law Enforcement Medical Aid & Rescue Training) as well worked in the 007th District during his career. The annual salary is $101,442. 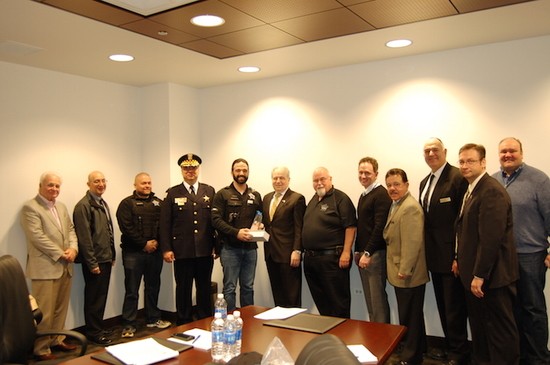 Mayor Rahm Emanuel’s police accountability task force, formed after the release of the McDonald video, had recommended replacing IPRA with a new civilian oversight agency.and whether the government agency that probes shootings by Chicago cops, the Independent Police Review Authority, has acted too quickly to absolve officers in death incidents without  adequate investigation.